We may like them or don’t, but we have to admit that some of them are great spectacles of forms, colors and lights, and they represent cultural attraction for the tourists, and have became a classic for the fans of modern architecture.

Of course they have interesting and fascinating interiors with lot of different possibilities for the actors and plays for modern theatre and other arts. You may have seen some of them, but this is our choice, and of course, there are so many theatre buildings around the world so the list is open and changeable. 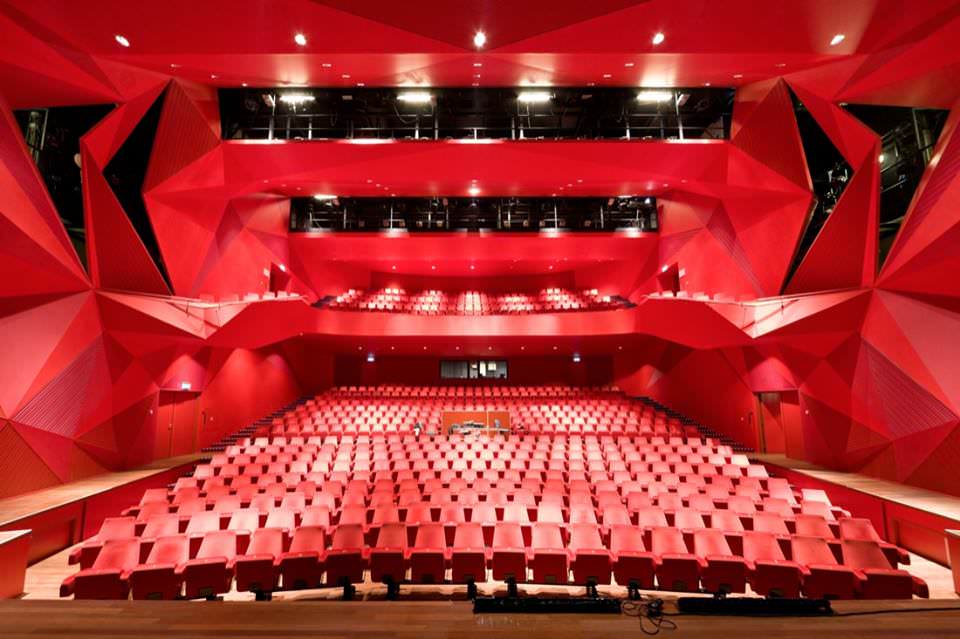 This design is integration of theatre arts and new media into sculptural form, composed of an overlapping multi-faceted surface with kaleidoscopic effect. The vertical foyer and grand staircase is designed as an element that carves through the center of the building volume. 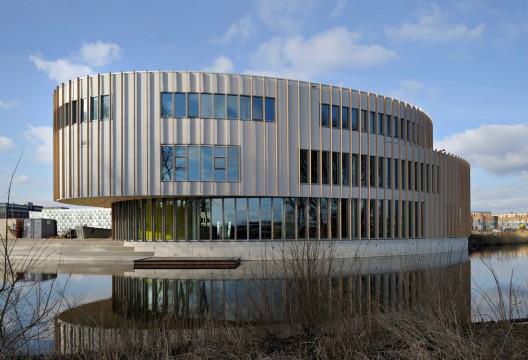 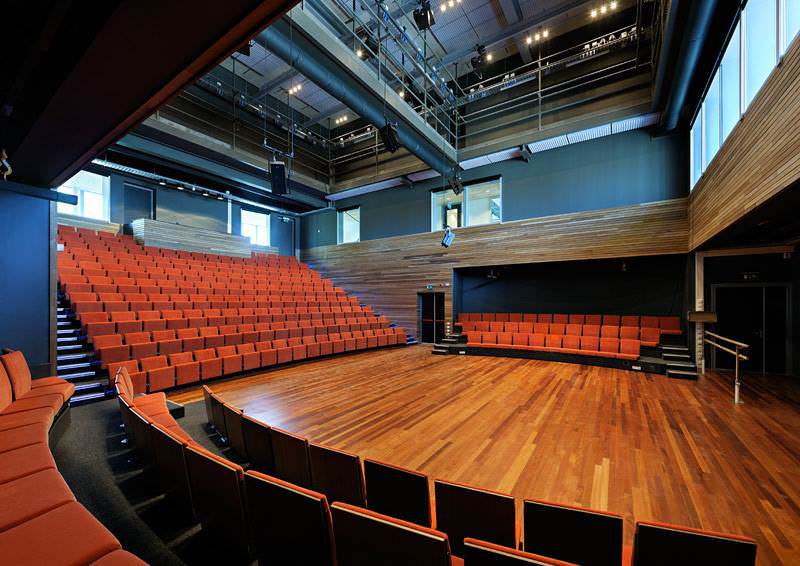 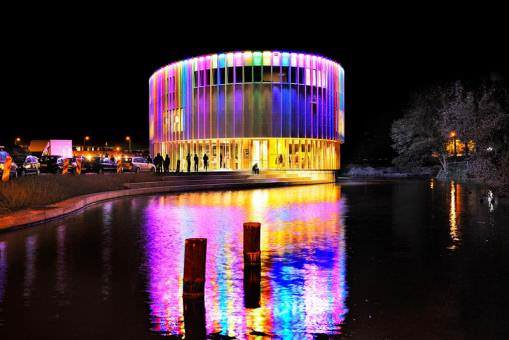 This cultural building was to be a multifunctional building for four users; a circus a theatre, the Youth Theatre School and the Theatre Workplace. The building is located at the edge of the Bijlmer park, beside the lake, and the position reflections in the water. 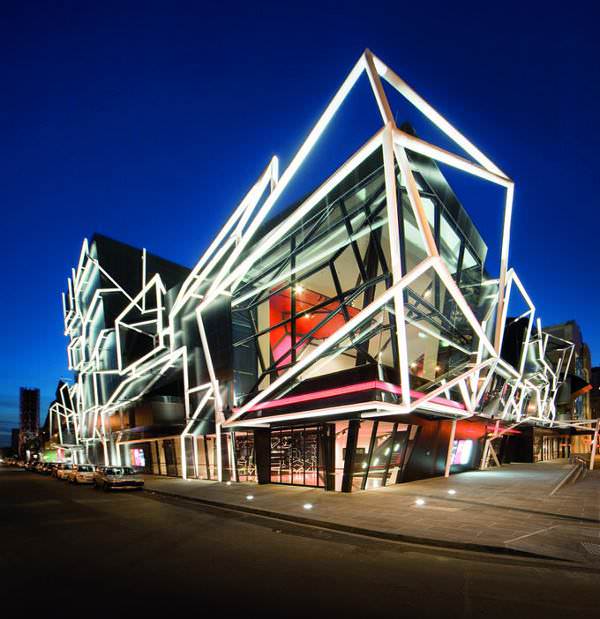 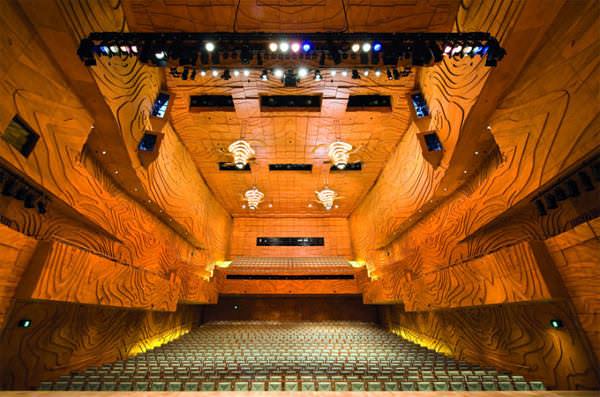 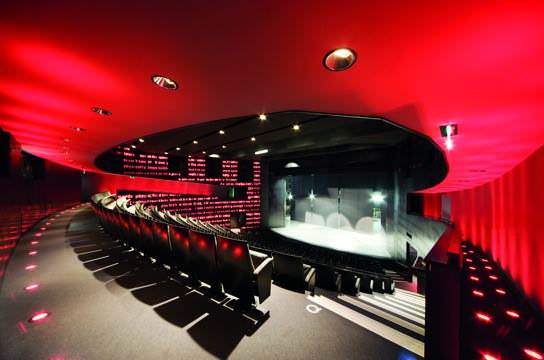 The Melbourne Recital Center and adjacent Melbourne Theater Company has two theaters which are a sight to behold, one has a fluorescent exterior, with black setting and pink magenta around a central stage, and the other, features natural texture that encases the walls in a symmetrical design. 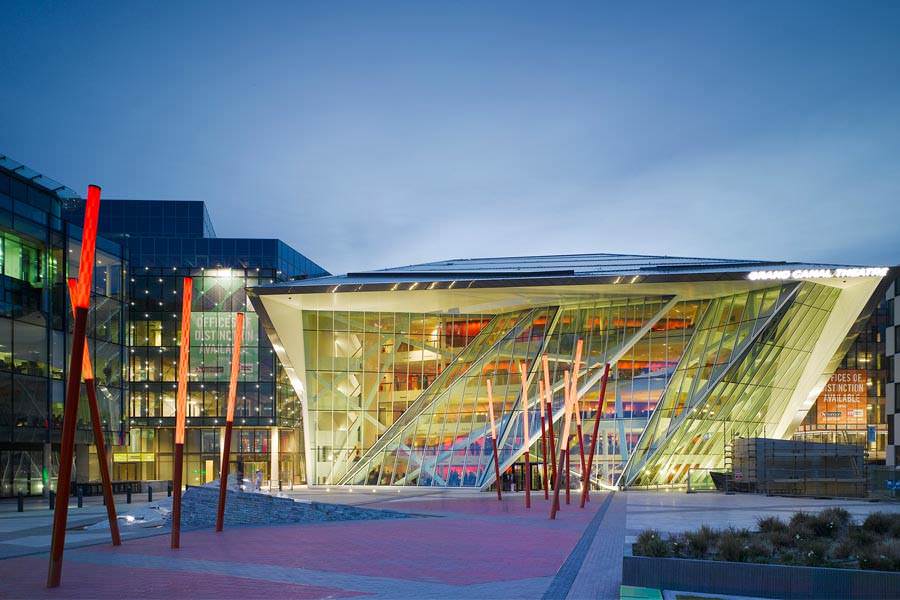 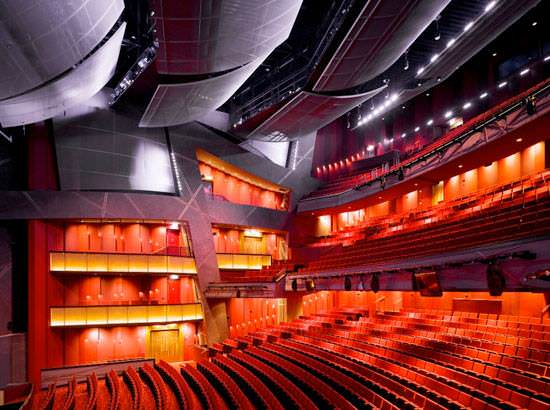 The Bord Gáis Energy Theatre in Dublin is located in the Grand Canal Dock as a touring theatre for Ballet, Opera, Musicals and Concerts, as the largest theatre in Ireland, designed to present theatrical productions that were previously unable to visit Ireland. 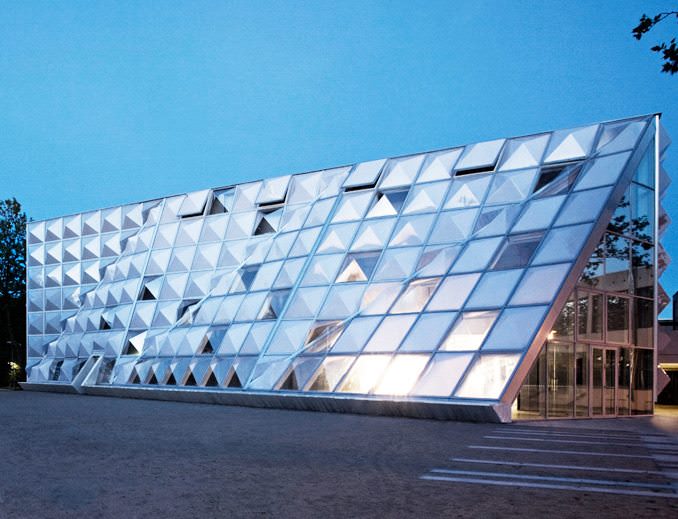 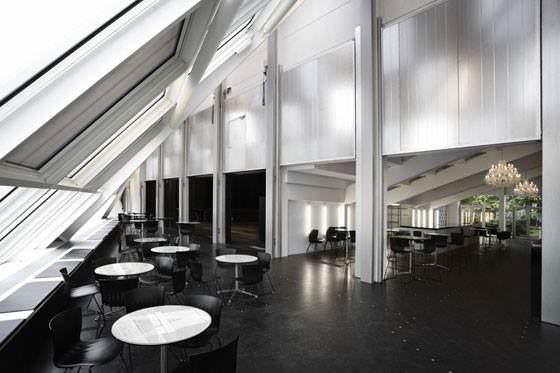 local community theatre in the Copenhagen neighborhood of Taastrup, is prepraven and The new facade is conceived as a translucent curtain of acrylic prisms embracing the existing building, and creating a new open foyer, arrival area, and café. 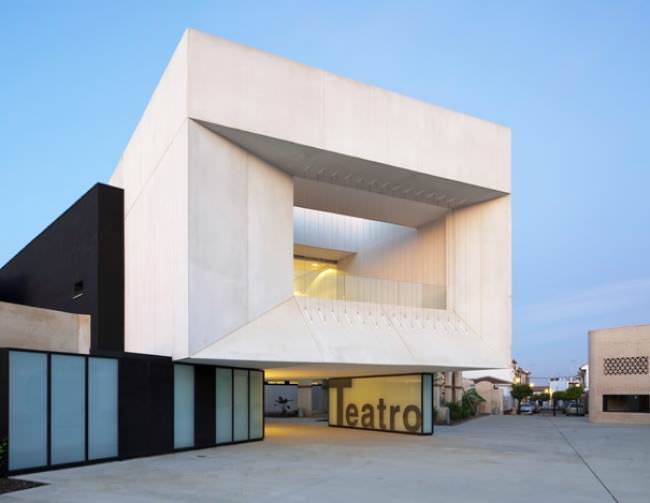 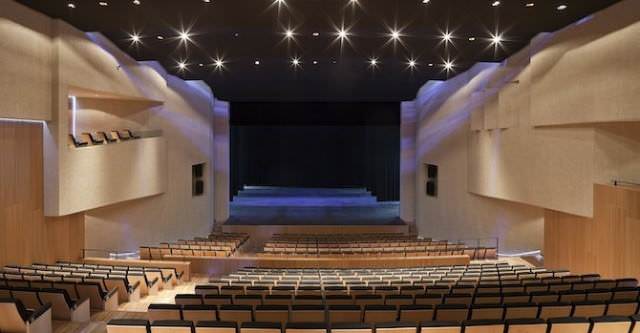 The existing buildings of Almonte Theater in Huelva, Spain, were integrated into the new design. Contrast between outside and inside, between old and new, including a monumental scale. 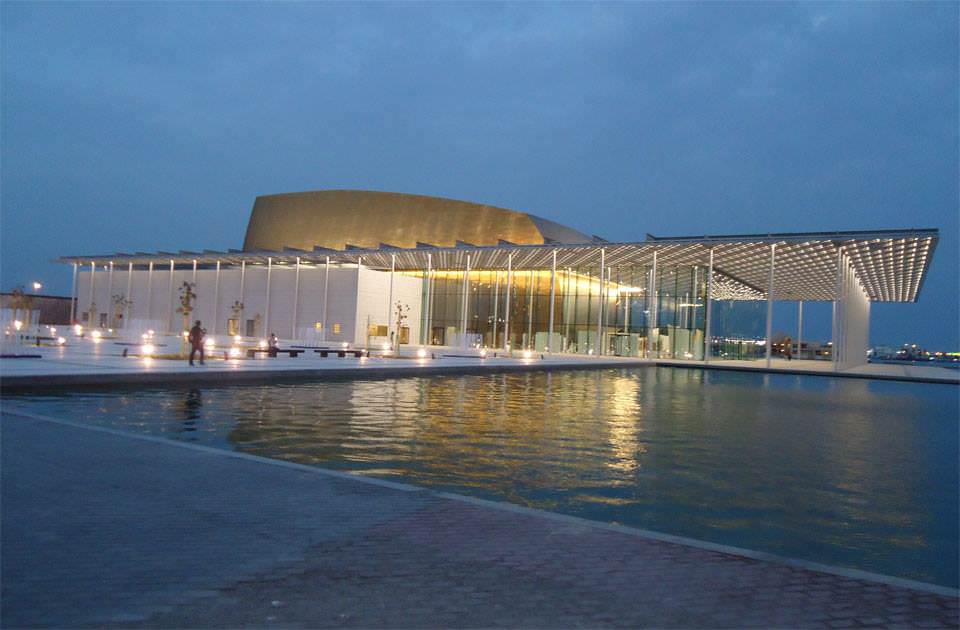 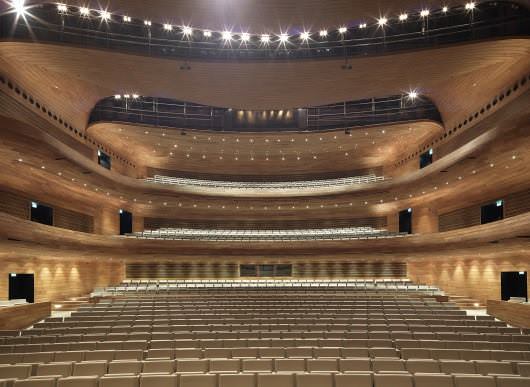 The design of the Bahrain National Theatre was inspired by the horizontal seascape of Bahrain and the poetry of its name, “Two Seas”, and it is designed as connection and big harmony between the land and the sea. 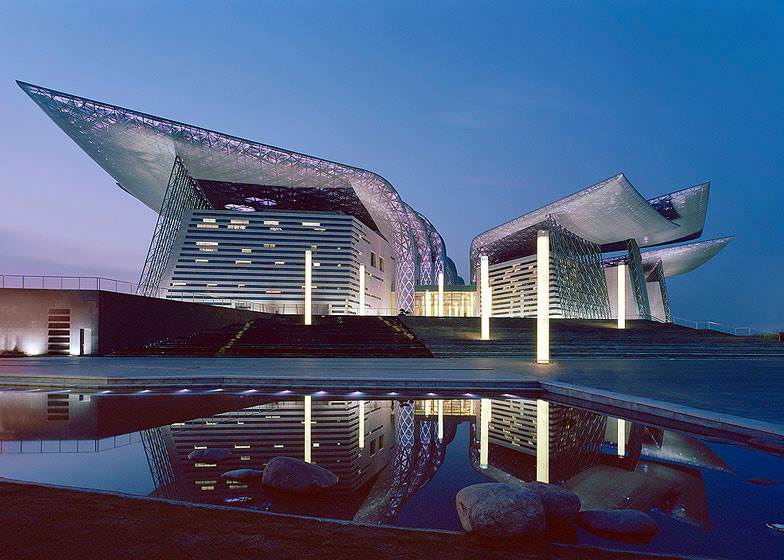 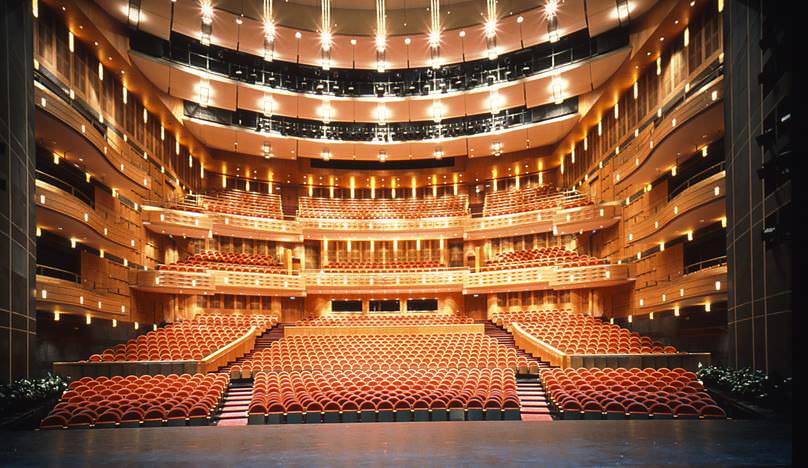 Wuxi Grand Theatre, is a one of the most famous cultural projects in Wuxi, China, standing on the south bank of Taihu Lake on a area of more than 70,000 square meters. Eight gigantic roof wings stretch, giving the building look of a flaying wings, and protecting the building from the heat of the sun. 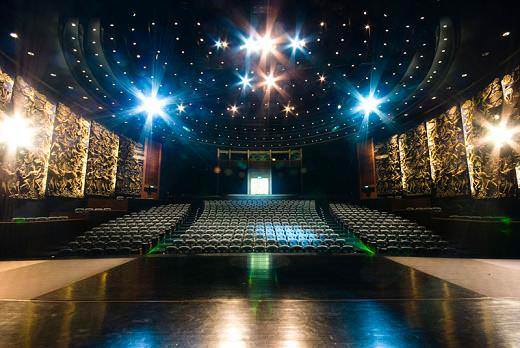 King Power Complex is Bangkok’s newest one-stop destination for tourists, which incorporates the 579-seat Aksra Theatre. Theatre is designed as luxurious, employing gold leaf in the wall bass-relief decorations and elegant furnishings in the public areas, stage supports over 200 performers.

I hope you enjoed and we wish you to visit the most of this theatres and these wonderful countries.