Coinciding with a week of celebrations for its namesake’s 450th birthday, Shakespeare’s Globe’s 2014 season opens this week bringing a packed season of The Bard’s work to its famous outdoor stage. The venue is also looking slightly further afield this month, however, with the launch of its epic two year world tour of Hamlet.

As the company of intrepid actors and stage managers get set to sail off into the North Sea, Executive Producer Tom Bird exclusively reveals more about their magnificent journey that will take them from the Arctic Circle to South Sudan, Prague to New Zealand.

The company consists of 12 actors capable of playing multiple parts (including two Hamlets) and four multi-tasking stage managers. A light-of-foot set means that the show isn’t reliant on the expensive roulette game that is international freight shipping, and that the whole production will be carried round the world by the company, the chests containing props and costumes part of the stage furniture. The Globe’s aesthetic allows for performances almost anywhere – we once played As You Like It to more than 2,000 people on a roundabout in central Bucharest. 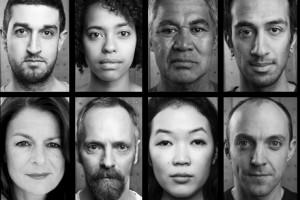 Perhaps the most fascinating and rewarding part of the whole experience will be to meet so many different audiences, with so many different expectations – perhaps about Shakespeare, certainly about how performance should work – and to engage with them. Despite the reach and duration of the tour, it remains a Globe production, out of our big democratic building, and so seeks an open, conversational relationship with any audience it plays in front of. How this conversation will pan out on the lush grass at the Copan Ruins in rural Honduras, in the Muson Centre in Lagos, on a marae in New Zealand, in the courtyard of Juba University in South Sudan, by the St Lawrence river in Canada and in the Palace of the Grand Dukes of Lithuania is anyone’s guess. But it’s a conversation we are itching to have.

The Hamlet tour will be the first production to play at Gdańsk’s exceptional new Shakespeare Theatre when it opens in September 2014.