When we look through history of theatre, we must put oar deserved attention to one segment of theater plays-costumes. In the faraway past, in the beginning of theater plays, when Shakespearean plays were born, costumes were the only and very important visual concept. Costumes would help the audience to understand what type of character, nationality and religion they were, and sometimes costumes were marking the personality of the character. Costumes were complemented by, make up, hairstyles, hats, shoes, and other accessories. And sometimes there were reflection of the fashion of the period.

It is very important to know the history of costumes, especially for the designers, because sometimes they must replicate costumes for plays that represents earlier period.

Before the humanist ideas of the Renaissance, moral power was important for the Church, and theatre was all about religious

education and demonstration of political power. The new dispensation found inspiration in the older civilization. Classical gods as Mars, Apollo or heroes, such as Hercules or Caesar were accompanied with dancers and singing boys dressed as nymphs, fauns and satyrs. The plays were expected to imitate classical prototypes.

In Middle Ages actors had costumes representing Joy, Hope or Fear, but in later period there were exotic costumes keeping Classical in them – Venus and the Graces, Juno, Mars, Amor and Neptune attended by satyrs and nymphs.

There were some very important rules, comedy should use ordinary clothes but tragedy must be dressed in an aristocratic manner. In comedy they could use velvet and satin, tragedy they were dressed in gold or silver.

There were some very important rules, in comedy should be use ordinary clothes but tragedy must be dressed in an aristocratic manner. Or comedy could have velvet and satin, and in tragedy dressed in gold or silver. There were rules on specification of the colors, following the costume traditions of the Roman stage, and white costumes were for old men, colored s for young characters, yellow clothes for prostitutes and twisted cloaks for pimps. 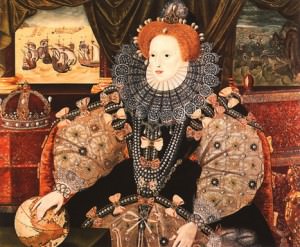 today, and the characters had strong regional associations, identity depended of the costume.

In Shakespearean plays, there was typical eccentric mixture of outfits and actors had habit of borrowing the more fashionable outfits. For that reason parties and masque costumes also found their way into the wardrobe stores. Shakespearean costumes were made in color coordinated design concept! Such special costumes were made for characters as Henry V, Wolsey, Tamerlaine, Faust, and Tasso.

English theatre did not yet had a real women actor… King Charles wife, Queen Henrietta Maria, shared her husband’s passion for masking, and only for her was created fancy dress versions of court attire, decorated with delicate evocations of antiquity.