n ancient times in Athens tragedy was born around ritual grounds where a sacrifice was placed to satisfy the gods. Because on the place of the performance a hypocrites, an actor performed, the members of the choirs were pulled a little to the back, to two thirds of a circle, leaving a third for a tent from where the actor entered and where he came back to change clothes. That tent was called skene: that Is stage!

This basic element that can be sat as the basic part of theatre that was left as a heritage from this earliest form of theatre. The architectural structure, the space where the earliest plays were performed, where by some experts built at the time of expansion of theatre, and by some, before theatre was in phases of birth.

Some researchers find back at time different forms that were predecessors to the form of the scene that was conceived afterwards. The ancient scene builders tried to make the place for the actors to be higher, but then the choir was hard to see. They tried to rearrange the composition of the choir, the main scene, the proscenium etc. 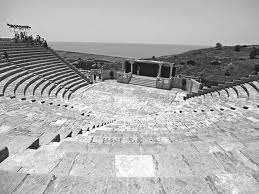 When we talk about the stage in those days, we mustn’t think that the always present background led the imagination of the audience to accept it like royal palace, or temple, or anything else, was the only one used in ancient theatre. It was changed by the need of the play that was performed. The actors could enter the stage from the doors in the background but trough side doors to. There is nothing that can lead us to believe that they used curtains. The stage objects in the begging were few, but in time there numbers grew and they became more sophisticated. The main were “ekkuklema’ –“mobile platform”, that came in to the stage to show what happened or what is happening inside, “mechane” so gods or other heroes fly to the sky, “theologeion’ in order to show gods to a higher places on stage, “distegia”- fixed platform , Harons stairways and “anapiezmata” for calling the gods from underground places, “bronteion’ for making thunders, “keranouskopeion’ for litghnings etc..