Amongst the great wonders of the world should be the history of ancient Athens and Rome. In these parts of the world more than two thousand years ago, flourished cultures that have had a significant impact on shaping the future of western art, culture and the whole of human society.

By disputes between people in these parts of the world, in small towns were the answers, small basic solutions to major problems of the human spirit. In rhythmically modulated words or by observing young bodies exposed in the fighting arenas, singers and writers found the secret of the eternal composition. The local needs once and for all shaped the laws of architecture, and from some religious rituals, drama and theatre were born into two of its typical forms: tragedy and comedy. 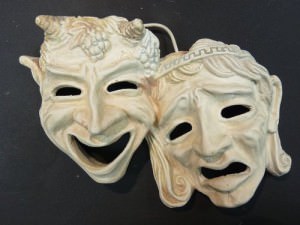 Spirituality was based on fear, respect, and admiration towards nature.

Afterward, the leaders of the choir, the coryphaeus, started to speak in the first person as the great Dionysus. It is considered that the first man to ever set up a performative a tragedy is the legendary Thespis. This manifestation was a recognition of the human need to be godlike, a confusing way of Christian mass, common at primitive people. They believed that in doing so, they were getting some of the god’s essence, that in some way they are like him.

This point of view remains to this day, throughout the people all around the world that consider themselves as part of the world of theatre.

The Choir in Ancient Theatre