Since a theatrical event takes place in real time, theatre exists in the present moment. But through its revivals, adaptations, parodies, continued traditions, and the inevitable comparisons made between new and earlier plays, theatre is also deeply rooted in the past. To understand the theatre of today more clearly, it is helpful to look at the traditions of theatre in the past.

Although the exact origins of theatre are lost in the mists of prehistory, existing evidence suggests that it grew out of a combination of ritual and storytelling. The first extant, recorded drama is the ancient Egyption Abydos Passion Play, which dates from at least 2500 B.C. Although this ceremonial springtime drama was performed for over a thousand years, it would not directly influence the continuous tradition of which theatre today is a part. Dramatic art, however, spread to the East and West, where separate traditions arose.

In the West, the ancient Greeks produced a vigorous blend of myth, legend, philosophy, social commentary, poetry, dance, music, public participation, and visual splendor that stands as one of the greatest bodies of theatrical creation of all time. The Romans would copy and adapt the Greek creations of comedy, tragedy, large amphitheatres, and theatrical conventions, but their own arenas for gladiatorial contests, sea battles, and gruesome public massacres would demonstrate a capacity for originality. Medieval drama would begin as part of the Christian Church liturgy performed by clergy, but would grow into a festival involving the entire community, in which, often over many days, multiple “mystery” plays, linked together in a cycle, would enact the Bible’s account of existence from Adam and Eve to Doomsday. With the Renaissance, professional theatres performing in the vernacular, such as Italy’s semi-improvised commedia dell’arte, emerged. 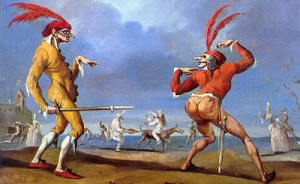 Influenced by Greek and Roman classics and contemporary works, writers like William Shakespeare brought dramatic writing in English to a pinnacle of achievement. Their theatre featured an unroofed pit and roofed galleries for audience members who watched works, on a thrust and covered stage, that relentlessly investigated the human condition and character. The royal theatre of the Enlightenment consolidated and refined prior achievements. Its neoclassical theatre would prescribe rules of genre, time, place, action, length, and character type that would reflect the rational philosophies and royal power hierarchy of the age. In reaction, the romantic theatre of the late eighteenth and early nineteenth centuries would reject rational decorum and rules, preferring forms and subjects that were exotic, grotesque, and sprawling, all imbued with the free-flowing spirit of the individual rather than the social organization of the court.

Theatre in Asia contains thousands of rich traditions and forms that differ greatly from those in the West and from each other. Nonetheless, Asian dramatic forms generally adhere to certain fundamental principles, such as, among others, rhythmic and melodic dramatic language; chanted, danced, and sung dialogue; broad stylization; and a visual and sensual rather than literary or intellectual emphasis. India has given rise to two particularly esteemed dramatic traditions. Sanskrit dance-drama began before 200 B.C. Its danced and acted stories remained popular for 1000 years. A more recent creation, Kathakali, is the most popular dance-drama form in India today. The texts are sung by two singers to the side, to the accompaniment of gongs, drums and cymbals, as dancers dance and pantomime the dramatic action from one the great Indian epics with precise hand, foot, eye, and facial movements. 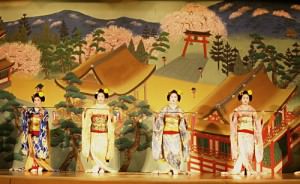 Japanese No theatre, the oldest continuously performed drama in the world, is a highly revered and cerebral theatre. On a precisely measured and highly polished cypress stage, actors enact and “dance” a tragic and mysterious drama that almost always portrays supernatural events and characters, all to the accompaniment of a seated chorus and small orchestra. Japan’s Kabuki theatre began as and continues to be a popular form featuring dynamic movement, passionate emotion, flamboyant dance, elaborate stage machinery, spectacular effects, and striking scenery and costumes. In China, Xiqu (“tuneful theatre”), known as Chinese Opera, would branch, over hundreds of years, into approximately 360 different variations, the best known of which is Beijing Opera. Since the stories and plots of the plays are well known, the focus in placed on the actor’s individual skills of singing, speech, acting and movement, and martial arts and acrobatics. Virtuoso performances take place in the context of visual and aural excitement, with bright costumes and makeup, dynamic movement, extreme falsetto singing, and the clanging of gongs, cymbals, clapper traps, and drums. Many of these traditions of the East and West continue today, and those that do not still exert an influence on modern theatre.

The History of Theatre Costumes Began in the Shakespearean Era…

The Choir in Ancient Theatre