At the time when the first absurd plays were being written and staged in Western Europe in the late 1940s and early 1950s, people in the East European countries suddenly found themselves thrown into a world where absurdity was a integral part of everyday living. Suddenly, you did not need to be an abstract thinker in order to be able to reflect upon absurdity: the experience of absurdity became part and parcel of everybody’s existence.

Hitler’s attempt to conquer Russia during the Second World War gave Russia a unique opportunity to extend its sphere of influence and at the same time to ‘further the cause of [the Soviet brand of] socialism’. In the final years of the war, Stalin turned the war of the defeat of Nazism into the war of conquest of Central Europe and the war of the division of Europe. In pursuing Hitler’s retreating troops, the Russian Army managed to enter the territory of the Central European countries and to remain there, with very few exceptions, until now. The might of the Russian Army made it possible for Stalin to establish rigidly ideological pro-Soviet regimes, hermetically sealed from the rest of Europe. The Central European countries, whose pre-war political systems ranged from feudal monarchies (Rumania), semi-authoritarian states (Poland) through to a parliamentary Western-type democracy (Czechoslovakia) were now subjected to a militant Sovietisation. The countries were forced to undergo a major traumatic political and economic transformation.

The Western Theatre of the Absurd highlighted man’s fundamental bewilderment and confusion, stemming from the fact that man has no answers to the basic existential questions: why we are alive, why we have to die, why there is injustice and suffering. East European Soviet-type socialism proudly proclaimed that it had answers to all these questions and, moreover, that it was capable of eliminating suffering and setting all injustices right. To doubt this was subversive. Officially, it was sufficient to implement a grossly simplified formula of Marxism to all spheres of life and Paradise on Earth would ensue. It became clear very soon that this simplified formula offered even fewer real answers than various esoteric and complex Western philosophical systems and that its implementation by force brought enormous suffering. 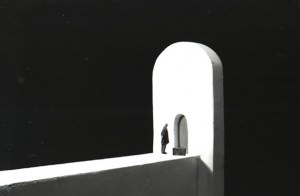 From the beginning it was clear that the simplified idea was absurd: yet it was made to dominate all spheres of life. People were expected to shape their lives according to its dictates and to enjoy it. It was, and still is, an offence to be sceptical about Soviet-type socialism if you are a citizen of an East-European country. The sheer fact that the arbitrary formula of simplified Marxism was made to dominate the lives of millions of people, forcing them to behave against their own nature, brought the absurdity of the formula into sharp focus for these millions. Thus the Soviet-type system managed to bring the experience of what was initially a matter of concern for only a small number of sensitive individuals in the West to whole nations in the East.

This is not to say that the absurdity of life as experienced in the East differs in any way from the absurdity of life as it is experienced in the West. In both parts of the world it stems from the ambiguity of man’s position in the universe, from his fear of death and from his instinctive yearning for the Absolute. It is just that official East-European practices, based on a contempt for the fundamental existential questions and on a primitive and arrogant faith in the power of a simplified idea, have created a reality which makes absurdity a primary and deeply-felt, intrinsic experience for anybody who comes in contact with that reality.