The Theatre of the Absurd is totally lyrical theatre which uses abstract scenic effects, many of which have been taken over and modified from the popular theatre arts: mime, ballet, acrobatics, conjuring, music-hall clowning. Much of its inspiration comes from silent film and comedy, as well as the tradition of verbal nonsense in early sound film (Laurel and Hardy, W C Fields, the Marx Brothers).

It emphasises the importance of objects and visual experience: the role of language is relatively secondary. It owes a debt to European pre-war surrealism: its literary influences include the work of Franz Kafka. The Theatre of the Absurd is aiming to create a ritual-like, mythological, archetypal, allegorical vision, closely related to the world of dreams.

Some of the predecessors of absurd drama: 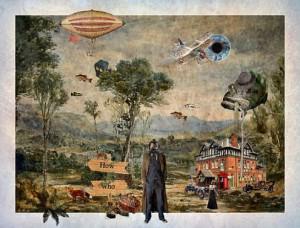 Alfred Jarry is an important predecessor of the Absurd Theatre. His UBU ROI (1896) is a mythical figure, set amidst a world of grotesque archetypal images. Ubu Roi is a caricature, a terrifying image of the animal nature of man and his cruelty. (Ubu Roi makes himself King of Poland and kills and tortures all and sundry. The work is a puppet play and its décor of childish naivety underlines the horror.) Jarry expressed man’s psychological states by objectifying them on the stage. Similarly, Franz Kafka’s short stories and novels are meticulously exact descriptions of archetypal nightmares and obsessions in a world of convention and routine.