Even the most primitive of theatrical presentations contains a look or sound that can be achieved only through design. An army of backstage personnel create and realize what Aristotle called the theatre’s spectacle. Although they are commonly divided into differing areas, and we will examine them this way, none of them can stand in isolation, and for this reason productions are prepared by design “teams.”

A theatre’s architecture affects each area of design, since it determines the perspective from which the audience experiences the drama. Modern theatre utilizes two principal types of theatre buildings and staging formats, proscenium and thrust, that account for over 95 percent of professional theatres in Europe and American today. Proscenium format places audience and action on two sides of a proscenium arch, like a picture frame, in an essentially rectangular space. It is conducive to creating illusion and spectacle, while thrust design, in which the audience sits on three sides of a stage, is more actor-centered, since it puts the performer in the midst of the audience. A third configuration, arena format, surrounds the playing space with the audience “in-the-round,” and limits scenery to pieces that will not obstruct vision. A last alternative, black-box theatre, is a flexible space that can be configured to any desired arrangement, including environmental staging, in which various locales can be interspersed throughout the room.

Scene design began its first great phase with the development of artificially illuminated, indoor stages in Europe, initiating a movement toward scenic illusionism that continues in one of the two major trends in scenic design, the realistic. The other trend, toward metaphoric design, favors a more conceptual, kinetic, and theatrical approach that effectively establishes mood and style. All designs, however, serve practical and metaphoric functions. The scene designer utilizes a number of materials, such as platforms, flats, draperies, properties, furniture and modern inventions such as scrim, electrical light, and various kinds of stage machinery. 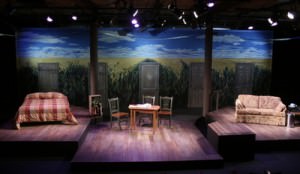 In addition to its use for illumination, light has been used for dramatic effect in the theatre since the Ancient Greeks. Lighting has always been a major theatrical consideration, but only with the advent of gaslight in the nineteenth century and electricity afterwards could lighting achieve flexibility of control and level of intensity that would allow it to become more pertinent to individual works and dramatic action. Through control of instrument types, angles, colors, shadows, and moment-to-moment adjustments of intensity and directionality, modern lighting designers can make complex changes in illumination that serve the goals of visibility, focus, realism, and atmosphere. In the process of design, the lighting designer creates a light plot and cue sheet, which show information about lighting instrumentation and movement. These are later translated into the actual hanging, focusing, and gelling (coloring) of the light instruments and the computerized recording and execution of changing combinations of illumination levels and timings. 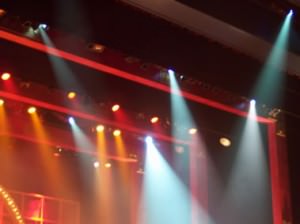 Costumes began as essentially ceremonial vestments in ancient times, but began to be used to express characterization during the Renaissance. Today, costume design serves the functions of hinting at its original ceremonial magic, reflecting the play’s dramatic world, expressing character individuality, and serving as wearable clothing for the actor. In the process of design, the costumer selects and oversees the acquiring and/or building of costume elements after creating the designs on sketches with sample swatches of fabric choices attached. Makeup design, like costume, has a ceremonial origin and is often done by the costume designer. It serves purposes as various as simplifying and emboldening the actor’s features, to aging or “characterizing” him or her, to making the actor appear to be a different species altogether. Along with costume, makeup serves both realistic and symbolic functions.

Although music and sound effects have been a vital component of theatre since ancient times, advances in audio recording and playback technologies in the past few decades have led to the emergence of sound design as a major design area. Productions today regularly use electronic sound enhancement for actors’ voices in musicals, amplification of music and sound effects, as well as the playback, in some cases, of musical underscoring. The sound designer uses live and recorded sound, both in realistic and stylized ways, often through new technologies that have swiftly expanded sound’s theatrical potentials. New computer technologies have, in fact, become one of the most useful of tools for all design areas. Not only do they simplify much of the design process of putting ideas on “paper,” but allow much quicker revision than do conventional materials. Also, they allow access to vast databases of images and sounds, allow “virtual” design, and enable three-dimensional, scenographic modeling. Computers promise to continue and grow in significance in theatre design.

Outnumbering actors, designers, writers, and directors combined are the artisans and “technologists” who organize, build, and light the production. They are headed by various kinds of managers, such as production managers, stage managers, technical directors, and shop supervisors. The trend toward incorporating technology as a visible, aesthetic component of the theatre itself as well as the increasing use of recent technological innovations seems to lead toward the increasing importance and numbers of these critical backstage personnel.

If Theatre is Your Life you Have to…