The playwright is a contemporary anomaly, at once the most central figure of the theatre, from whose work the enterprise originates, but the most peripheral figure to the creation of the final theatrical event. In a playwright’s career, writing the play is the first step, but the work is not complete, ultimately, until on a stage. There are a number of ways, however, by which plays reach “the boards.” Open rehearsals, developmental workshops, staged readings, solicitation by theatres, new play festivals, developmental theatre companies, contests, agents, and fellowships all provide means of getting new work produced.

Drama differs from other branches of literature in being more than an arrangement of words on a page. It requires the conceptualization of numerous concrete, theatrical elements, such as movement, speech, costume, lighting, scenery, music, spectacle, and silence. As such, it reaches its final form only in performance. The written script is, in a sense, a blueprint for the play. Also, in contrast to other literary forms, its core is not descriptions or observations but an ordering of observable, dramatizable events. Its core is action.

Fine plays most often have a number of discernable, dissectable elements, but it is their interaction, which cannot be measured, that gives such qualities meaning. Qualities such as credibility and intrigue, richness, depth of haracterization, gravity and pertinence impart the weight, depth, dimension, and sense of importance to life that great plays contain. Speakability, stageability, flow, compression, economy, and intensity constitute its more easily discernable craft and give a specific and effective form to a play. In the end, all fine plays, concerned as they are with an art bound up so intimately with life, are a celebration of life. 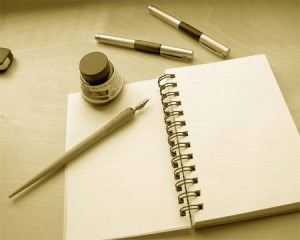 In the practical task of writing there is no set formula. Playwrights approach the process in a myriad of ways. Certain steps used as exercises to playwriting, however, indicate areas, such as dialogue, conflict, and structure, with which playwrights must grapple. Dialogue can be composed of remembered dialogue, which leads to the playwright’s next necessary step, writing imagined dialogue. Writing scenes of forced conflict is designed to lead toward the creation of convincing scenes of high conflict in which the playwright is able to get inside the experience of each character involved. Lastly, playwrights develop a play’s structure consciously through outlines, unconsciously, or by other means, but in any case thematic development, compression, and credibility depend on careful organization.

Some of the most exciting playwriting of the twentieth century was done in America. Eugene O’Neill was noted internationally both for his realistic and antirealistic works. American playwrights after him have often, like Tennessee Williams and Arthur Miller, blended elements such as realism, poetry, social commentary, and antirealism into a single play. Today, however, women, persons of color, and persons who write openly from the viewpoint of their sexual orientations have entered the ranks of the country’s most produced and admired playwrights. Examining the work of a group of playwrights who have followed O’Neill’s lead in gaining an international audience suggests the vitality and diversity of perspectives and forms in American playwriting today.