“The Theatre of the Absurd” is a term coined by the critic Martin Esslin for the work of a number of playwrights, mostly written in the 1950s and 1960s. The term is derived from an essay by the French philosopher Albert Camus. In his “Myth of Sisyphus”, written in 1942, he first defined the human situation as basically meaningless and absurd. The ‘absurd’ plays by Samuel Beckett, Arthur Adamov, Eugene Ionesco, Jean Genet, Harold Pinter and others all share the view that man is inhabiting a universe with which he is out of key. Its meaning is indecipherable and his place within it is without purpose. He is bewildered, troubled and obscurely threatened.

The origins of the Theatre of the Absurd are rooted in the avant-garde experiments in art of the 1920s and 1930s. At the same time, it was undoubtedly strongly influenced by the traumatic experience of the horrors of the Second World War, which showed the total impermanence of any values, shook the validity of any conventions and highlighted the precariousness of human life and its fundamental meaninglessness and arbitrariness. The trauma of living from 1945 under threat of nuclear annihilation also seems to have been an important factor in the rise of the new theatre.

At the same time, the Theatre of the Absurd also seems to have been a reaction to the disappearance of the religious dimension form contemporary life. The Absurd Theatre can be seen as an attempt to restore the importance of myth and ritual to our age, by making man aware of the ultimate realities of his condition, by instilling in him again the lost sense of cosmic wonder and primeval anguish. The Absurd Theatre hopes to achieve this by shocking man out of an existence that has become trite, mechanical and complacent. It is felt that there is mystical experience in confronting the limits of human condition.

As a result, absurd plays assumed a highly unusual, innovative form, directly aiming to startle the viewer, shaking him out of this comfortable, conventional life of everyday concerns. In the meaningless and Godless post-Second-World-War world, it was no longer possible to keep using such traditional art forms and standards that had ceased being convincing and lost their validity. The Theatre of the Absurd openly rebelled against conventional theatre. Indeed, it was anti-theatre. It was surreal, illogical, conflictless and plotless. The dialogue seemed total gobbledygook. Not unexpectedly, the Theatre of the Absurd first met with incomprehension and rejection. 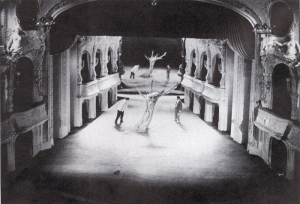 One of the most important aspects of absurd drama was its distrust of language as a means of communication. Language had become a vehicle of conventionalised, stereotyped, meaningless exchanges. Words failed to express the essence of human experience, not being able to penetrate beyond its surface. The Theatre of the Absurd constituted first and foremost an onslaught on language, showing it as a very unreliable and insufficient tool of communication. Absurd drama uses conventionalised speech, clichés, slogans and technical jargon, which is distorts, parodies and breaks down. By ridiculing conventionalised and stereotyped speech patterns, the Theatre of the Absurd tries to make people aware of the possibility of going beyond everyday speech conventions and communicating more authentically. Conventionalised speech acts as a barrier between ourselves and what the world is really about: in order to come into direct contact with natural reality, it is necessary to discredit and discard the false crutches of conventionalised language. Objects are much more important than language in absurd theatre: what happens transcends what is being said about it. It is the hidden, implied meaning of words that assume primary importance in absurd theatre, over and above what is being actually said. The Theatre of the Absurd strove to communicate an undissolved totality of perception – hence it had to go beyond language.

Absurd drama subverts logic. It relishes the unexpected and the logically impossible. According to Sigmund Freud, there is a feeling of freedom we can enjoy when we are able to abandon the straitjacket of logic. In trying to burst the bounds of logic and language the absurd theatre is trying to shatter the enclosing walls of the human condition itself. Our individual identity is defined by language, having a name is the source of our separateness – the loss of logical language brings us towards a unity with living things. In being illogical, the absurd theatre is anti-rationalist: it negates rationalism because it feels that rationalist thought, like language, only deals with the superficial aspects of things. Nonsense, on the other hand, opens up a glimpse of the infinite. It offers intoxicating freedom, brings one into contact with the essence of life and is a source of marvellous comedy.

There is no dramatic conflict in the absurd plays. Dramatic conflicts, clashes of personalities and powers belong to a world where a rigid, accepted hierarchy of values forms a permanent establishment. Such conflicts, however, lose their meaning in a situation where the establishment and outward reality have become meaningless. However frantically characters perform, this only underlines the fact that nothing happens to change their existence. Absurd dramas are lyrical statements, very much like music: they communicate an atmosphere, an experience of archetypal human situations. The Absurd Theatre is a theatre of situation, as against the more conventional theatre of sequential events. It presents a pattern of poetic images. In doing this, it uses visual elements, movement, light. Unlike conventional theatre, where language rules supreme, in the Absurd Theatre language is only one of many components of its multidimensional poetic imagery.

What the Great Brook and Pinter have said about Beckett