“I didn’t have time to be anyone’s muse… I was too busy rebelling against my family and learning to be an artist.” – Leonora Carrington

Leonora Carrington was a British-born–Mexican artist, surrealist painter, and novelist. She was one of the last surviving participants in the Surrealist movement of the 1930s.

Inspiration and support in earlier life

She was inspirited of surrealism in very early age, when in 1927 she saw her first Surrealist painting in a Left Bank gallery and met many Surrealists, including Paul Éluard. She became more familiar with Surrealism from a copy of Herbert Read’s book, Surrealism (1936).

Edward James surrealist poet and patron bought many of her paintings and arranged a show in 1947 for her work at Pierre Matisse’s Gallery in New York. 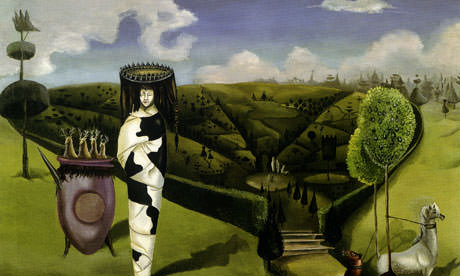 Carrington’s art often depicts horses, as in her Self-Portrait (Inn of the Dawn Horse) and the painting The Horses of Lord Candlestick. Her fascination with drawing horses began in her childhood. 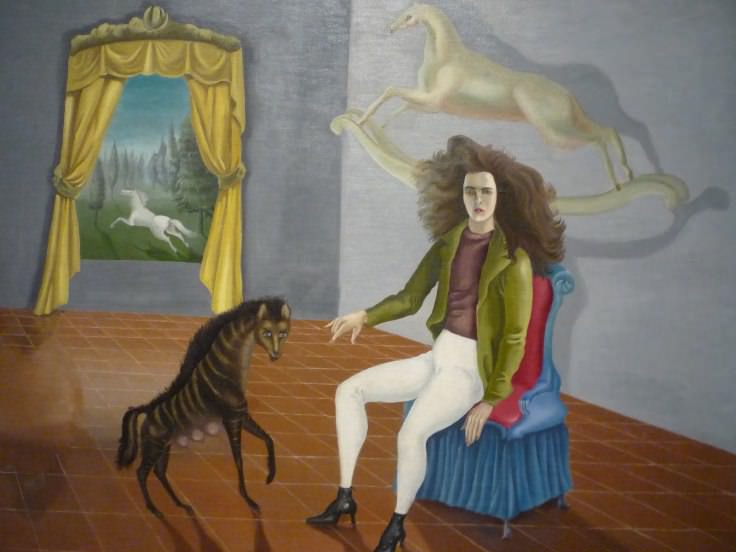 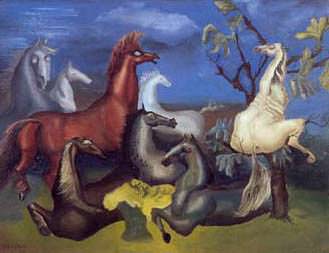 They was inspiration and for her sculptures too. 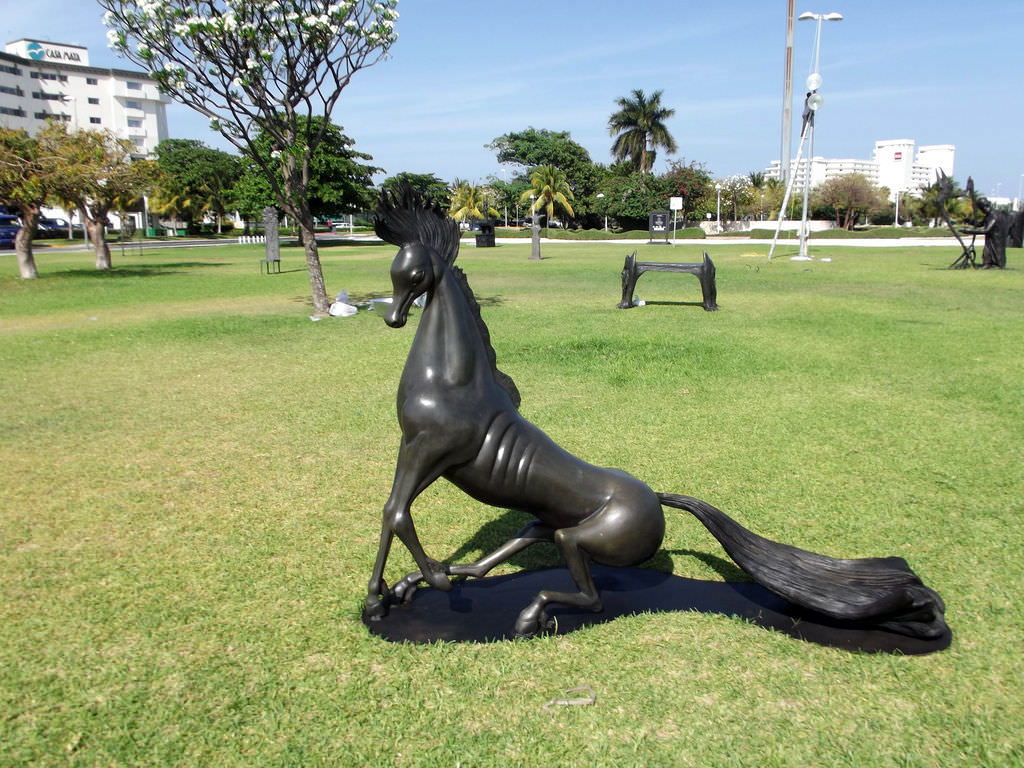 Horses appear in her writings as well. In her first published short story, “The House of Fear”,

But she also painted a lot of imagined animals and headed figures. 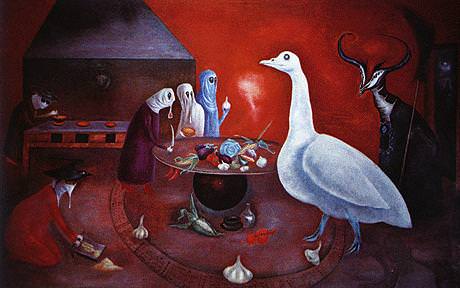 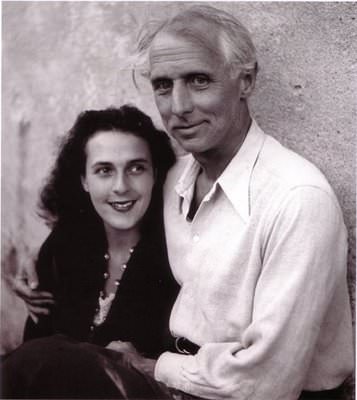 In the 1936 International Surrealist Exhibition in London, she saw Max Ernst’s work, and she was very attracted to the artist and his work. Later, they met she met in London, goes and lived with him in France. The two artists collaborated as a couple, collaborated and supported each other’s artistic development. They created sculptures of guardian animals to decorate their home. Carrington painted a portrait of Max Ernst, as a tribute to their relationship. 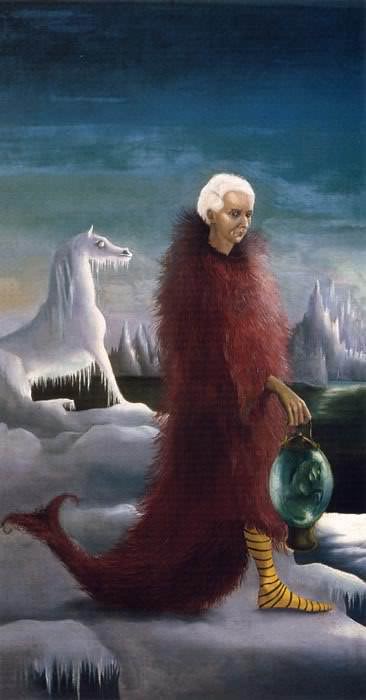 But their happiness had no long life. Ernst and Carrington were unable to resume their relationship. Ernst was German, and was arrested first time by the French authorities, and he was discharged a few weeks later with the intercession of Paul Éluard, and other friends. Ernst was arrested again, by the Gestapo, because his art was considered as….??? He managed to escape and left Carrington and fled to America with the help of Peggy Guggenheim, a sponsor of the arts, whom he married in 1941, but the marriage ended a few years later.

Carrington was devastated and fled to Spain. Paralyzing anxiety and growing delusions culminated and she had a breakdown. She is been institutionalized with intervention of her parents and treated with the strong drugs that were eventually banned by some authorities.

Later when she is being released into the care of a nurse who took her to Lisbon, Carrington ran away and sought refuge in the Mexican Embassy. With the support of André Breton, Carrington wrote her Down Below novel about her psychotic experience. She also created art to about that experience, Portrait of Dr. Morales and Map of Down Below.

She lived and worked in Mexico after spending some time in the 1960s in New York City. She was asked to create a mural which she named El Mundo Magico de los Mayas, in 1963 inspired by influenced by regional folk stories of the mural is located in the Museo Nacional de Antropología.

She later married Imre Weisz (also known as Emerico, or by the nickname “Cziki”), a photographer and the darkroom manager. Leonora Carrington died in 2011 at age 94, due to complications from pneumonia in a hospital in Mexico City. 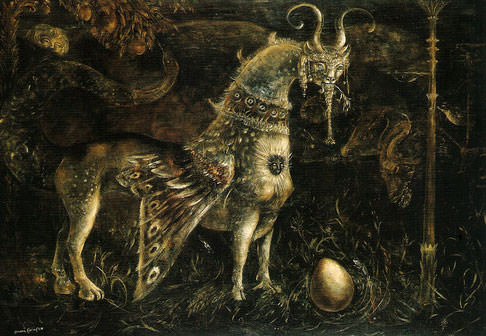 The first important exhibition of her work appeared in 1947, at the Pierre Matisse Gallery in New York City. Carrington was invited to show her work in an international exhibition of Surrealism, as the only female English professional painter. She became a celebrity almost overnight.

The first major exhibition in UK took place at Chichester’s Pallant House Gallery, 2010, as part of a season of major international exhibitions, Surreal Friends that celebrated women’s role in the Surrealist movement. 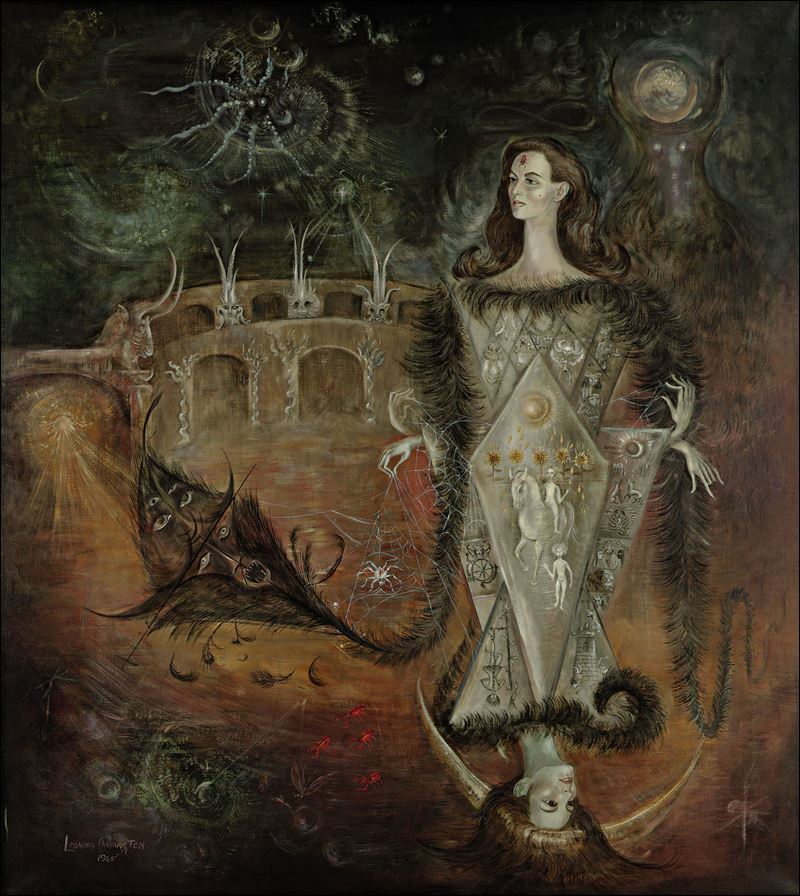 In 2013 Carrington was the subject of a major retrospective at the Irish Museum of Modern Art, Dublin. Titled The Celtic Surrealist, examined Carrington’s Irish background to illuminate many cultural, political and mythological themes in her work.