Street theatre is a form of theatrical performance and presentation in outdoor public spaces where there are large number of people.

The actors who perform street theatre can be individuals, little groups and theatres, theatres which want to research and experiment, or big mainstream theatres who promote their work, from the place they live, or other places, even countries. Street theatre performers sometimes need a license or specific permission through local or state governments.

Some actors are playing all life on the streets, and it is their choice, some of them because they have to, because their work is not accepted by the mainstream channels, and some of them started on the street and continue on and became famous. Robin Williams, David Bowie, Jewel and Harry Anderson are just some of the famous actors that began their careers in street theatres.

WHY ON THE STRET???
There are so many different reasons, but the outdoor has a lot of possibilities different from the conventional theatre stage and space.

Street performances may be socially, politically and/or artistically motivated. Some street theatre practitioners have extensively studied pre-existing street and popular theatre traditions, such as Carnival, commedia dell’arte etc. and wants to present them close to the original context.

Street theatre artists, including audience to participate directly in process of birth of the performances, in development and in end, and they are always different and depends of audience. They ask questions, and even they don’t provide answers, they try to analyze the problems of reality, and often e using humor or satirical notes to show some current problems. Their play’s are events that are part of real life. The outcome of a play might change from performance to performance. 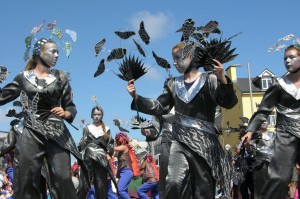 Street theatre uses minimum of lights, daily or street lights, they don’t change costumes, or they change them in front of the public, usually they don’t use curtains, and techniques, but they combines music, song and dance. The actors use themselves, their voice, body language, in close contacts with the audience.

Street theatre is friendly theatre because is dynamic and mobile, and give possibility to the majority on streets, markets, schools, parks, or other public places .They usually give them free show, and audience is not limited or chosen, because  the shows are not ticketed, and sometime, the audience is asked for contributions.

Making plays on a street is a learning process between actors and audience, where everybody learn something new, and make a new final products full of experiences, different viewers, and energies, they create  plays in that moment in present, which growing up in unpredictable and unexpected way.

THROUGH THE HISTORY
The history of street theatre dates back to the 19th century when laborers and party workers wrote and did plays during the Industrial Revolution in Europe. Women also produced plays like “how the vote was won” during the Suffragette movement in London at the beginning of the 20th century. Many productions came up in the Russian Revolution to reach illiterate people in faraway and remote areas. Street theatre played a role in anti-war movement During World War II. Mid century also saw plays in America and England addressing the issues related to student’s movement, women’s movement, racial discrimination and the Vietnam War. 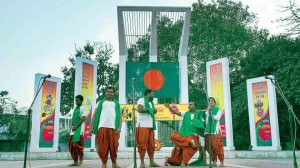 So, we can see that many companies and groups are politically motivated and use street theatre to combine performance with protest. This has occurred through the guerrilla theatre of San Francisco Mime Troupe, The Living Theatre, the carnivalesque parades of Bread and Puppet Theatre, and the work of Ashesh Malla and the Sarwanam Theatre Group of Nepal. 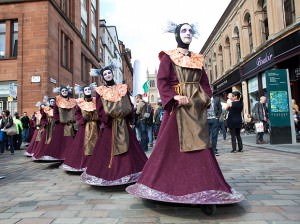 A character-based street theatre developed in the 1960s and 1970s, by groups like Lumiere and Son, John Bull Puncture Repair Kit, Exploded Eye and Natural Theatre Company. The performances were unannounced and featured characters who acted out a pre-arranged scenario, looking beautiful or surreal or simply just involving passers-by in conversation. 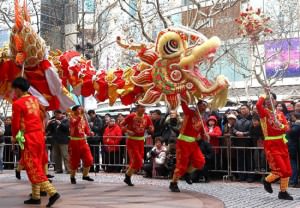 One of the interesting examples is Natural Theatre’s Pink Suitcase scenario. A number of smartly dressed people carrying bright pink suitcases enter at streets or buildings. They search for and miss their companions, on buses, hail cabs, end up in shop windows, etc. They meet up at a pre-arranged spot with the help of passers-by, perceptions of the area have changed and shopping has ceased for at least a few moments. Because of the universal humor, this piece has been seen in nearly seventy countries, performed by four or five actors, but it has been done with twenty-five.

Today, Street theatre is trying hard to retain itself in postmodern world between the popular entertainment mediums, and steel going on…

“The theatre is the involuntary reflex of the ideas of the crowd.” – Sarah Bernhardt