The Tragedy of Hamlet, Prince of Denmark, known as Hamlet, is one of the most powerful and influential Shakespeare tragedies in English literature, written between 1599 and 1602.

This is Shakespeare’s longest play, the most popular during his life, and still is most-performed of the Royal Shakespeare Company, but from the theatres all around the world too. This is one of the most filmed story. Through 400 years, the role of Hamlet has been performed by many actors from each successive age in many parts of the world.

The story of Hamlet ultimately derives from the legend of Amleth, preserved by 13th-century chronicler Saxo Grammaticus The play dramatizes the revenge of  Prince Hamlet to his uncle Claudius who had murdered his own brother, Hamlet’s father King Hamlet and then taken the throne, marrying his brother’s widow, Hamlet’s mother Gertrude.

We, most of us, already  knew that… but we said that Hamlet is actual all through the world so will take a time travel and we will visited Russia, and … because there is one of the important moment of the history theatre, is the Moscow Art Theatre’s production of 1911–12, as a collaboration  Constantin Stanislavski and Craig, known as  two of the most influential theatre practitioners of 20th century’s . 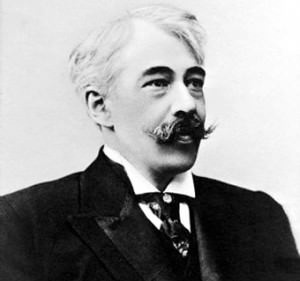 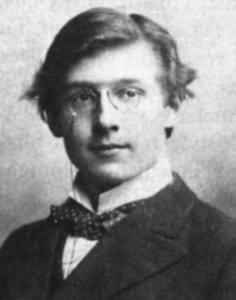 Isadora Duncan, the   most eccentric American dancer, introduced Craig and Stanislavski to each other, in faraway 1908. After their meeting Stanislavski invite Craig to help produce Hamlet for the 1910 season at the Moscow Art Theatre.
Craig, who was  an English theatre practitioner, had interest for the symbolist and simplistic designs, Constantin Stanislavski Russian, was creating a world of theatre based on  realistic acting , and the psychology, based in  complexities of the mind.
Craig conceived Hamlet as a monodrama, in which every aspect of production would be subjugated to the play’s protagonist; the play would present a dream, symbolistic vision seen through Hamlet’s eyes, because Craig wanted stylized abstraction.
Stanislavski wanted psychological motivation, he wanted to prove that his ‘system’ for realistic acting could meet the formal demands of a classic play. His vision for Hamlet was as an active, energetic character,   While Craig saw him as a representation of a spiritual principle, in destructive struggle.

At times this lead to conflict between the entire cast and crew, but  two of them   searching for  new unconventional ways to bring life to the stage, and  made one of the most unique, and impactful productions of all the 20-th  century.

That was on 5 January 1912, and it was met with ovations of the public and highly critical reviews from the Russian press, that Craig’s modern concept distracted from the play itself. The actors,  Olga Knipper (Gertrude), Nikolai Massalitinov (Claudius) and Olga Gzovskaia (Ophelia) received poor reviews in the Russian press, but Vasili Kachalov’s performance as Hamlet was praised as a genuine achievement. 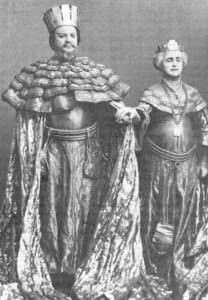 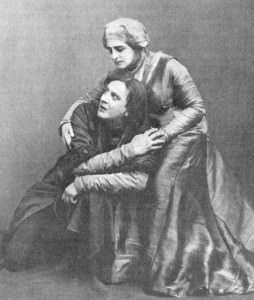 The production attracted enthusiastic worldwide attention, with reviews in Britain’s The Times and in the French press, as an event that influenced the history of production style in the theatre as a great triumph of Craig’s vision, and revolutionary in the staging of Shakespeare’s plays in the 20th century.

It became “one of the most famous and passionately discussed productions in the history of the modern stage.”